Swedish Basketball TV - Came from love for the game

Swedish Baskettelevision has been a great success in making basketball more available to the Swedish people and to the world.
The inventor of it is Jakob Törnell. Here in picture next to Sweden’s basketball superstar Jonas Jerebko. 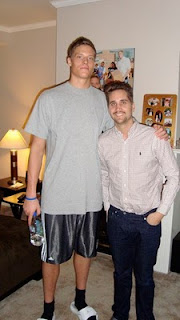 Where did the idea come from (please tell more about how it came to a start)?
- I was constantly searching the web for dunks and highlights from the Swedish Basketball League. When I was searching I discovered that there was basically not a single clip from the league - no highlights, no interviews, no nothing.

So I called SBBF and told them about my idea of creating a site (www.svenskbaskettelevision.se) and a YouTube account so that we could reach out to basketball fans and promote Swedish basketball. SBBF liked the idea. Me and buddy Magnus Stråhle started to work once a week the following six months in order to establish the concept. After that, I´ve been working with Svensk Baskettelevision in my free time. I just love basketball.

The site cost about 15 000 SEK to build and we bought our own video cameras, which we have used to make all the interviews.

Since SBBF is providing WebbTV, we also wanted to air the games at the site. And we did.
Have you felt that you have made a difference for basketball fans around Sweden and what has been said about that?
- Over the years, many people have come up to me and Magnus and given us credit for what we have done. I believe that we have made a difference and that we have promoted basketball in a good way. Not everyone has liked all our work, but I would say that in a whole, people are extremely positive. Since the start of 2007, we have put out over 1000 clips on YouTube and have had over 700 000 viewings. The site itself (www.svenskbaskettelevison.se) has had over 1.4 million viewings.

It looks easy when pros do interviews, but it isn`t that easy right? Please tell us about some blooper moments!
- To start with, neither me or Magnus are pros, we are happy amateurs who love basketball.
I got two really funny moments with the same guy, the NBA player Ben Wallace. It was my first interview with an NBA player and I was really nervous. Ben had just been traded and was about to play his former teammates. So, I stepped up to Ben and asked one of my most stupid questions ever: "Hey Ben, you are going to play you former teammates, how do you feel about that, I mean, do you feel like going out and just punch someone you didn’t like in his face?" Ben looked at me and said: "No". And then he stepped away from me, which I can understand.
The following year when I was in Detroit, I tried to interview him again, when I asked him the question he just looked at me and didn´t answer. I don´t know if he remembered me, but he didn’t like me, that´s for sure. I can understand that, ha ha.
I also got a funny one from the Chicago Bulls. I was interviewing Joakim Noah when one of the workers farted. You can watch it in the interview here.