....that Sødertalje Kings are in the top of the Swedish league. They got 6-0 start of the season and if they can keep their players healthy the whole season, they will be a pain in the ass for everybody. 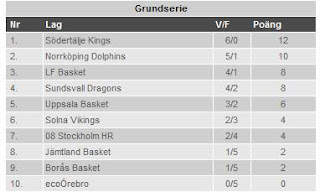 As headcoach Vedran Bosnic is doing his first season, but its one of many season on toplevels where he has had to work hard to succeed. He hade a long and good playing career and has played in many countries and for many different coaches, he is well prepaired. He used to work hard as a player, now its the same but as a coach.

He really has my respect, he knows the game and he is not a "babysitter" he`s a coach.

Most of the teams in the Swedish league dont have the budget as LF basket or Norrkøping got, but once you know that, you have a choice to make and some things to find out.

If we dont have the money, what can we do så we can compete with the rest of the teams with much bigger budgets and for Coach Bosnic, the answer is simply!


Practise hard and work harder than the rest.
I think its great since they show that its NOT ALL ABOUT THE MONEY, but sure it helps, but if you prepaire and practise hard you can always shake what shouldn`t be able to be shook.
Posted by Coach Holmgran at 12:04