Cryin for me - Wayman Tisdale

Former great basketplayers Wayman Tisdale died in 2009 many years to early as a basketballplayer he ad som glory years and in 2007 he decided to go for music which was his other passion.

You can read more about Tisdales life here 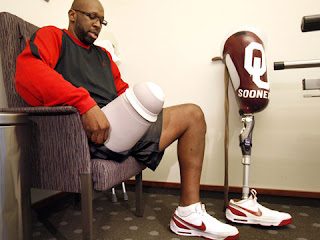 As you see one of his legs is gone in the pic and that knee was amputated after they discorvered cancer in his knee.

He was great friends with artist Toby Keith and he wrote a great song to him after he died.

Listen to this song and you can feel the love and pain between to friends.