I have always wondered about how much effort is put in to following youth players that go to the states for high school and college. I`m not talking about the top players from each country they usually everybody has check on, but the other players that maybe will develop much in their USA years.

How much effort is put to finding players in the USA with double citizenships?
Last year....I "found" a player from the USA with a swedish mom and he`s good. He came in to the gym and asked if he could practise and I talked to his mom and dad and found out that he was actually swedish. Born here but moved to the states after a few years.....

His name is Jonas Pollard and plays at Minot State University, he`s a comboguard 6`3,and very athletic. 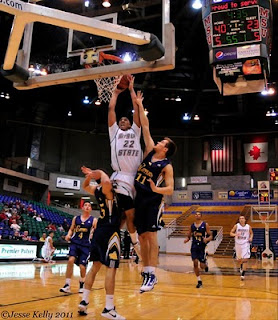 Stats for this season

Usually reasons for not finding this players are money reason and resources, but you only have to find ONE player in 10 years and it can change the whole success of your nationalteamsprogram no matter what level youth or senior.

I think its a big misstake by federation in "poor" basketball countries like for example Sweden, Denmark not to put the effort in, since the rewards can be tremendous for the nation.

Another player that is forgotten is Swedish 7`1 Jakob Batycki playing highschool ball at Phelps highschool and since he left sweden nobody from nationalteams organizations have even talked to him (what I have heard at least) and thoose 7`1 guys are so many of? Well not.....

He playing HS ball and actually right now is a starter for his team, he will go one more year after this in highschool and without letting out any names I can say that well respected colleges at d1 level have shown interest for him.

He has as a youthplayer done some nationalgames for Sweden, but now forgotten. What happens IF he becomes as good as he can and one of thoose d1 schools takes him, will somebody contact him then, propably yes, but the NEW question will then be;
Will he be interested after being forgotten for several years?
Posted by Coach Holmgran at 11:44