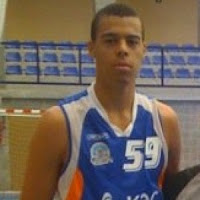 You are one of the talents (born 91) coming out of Denmark, what are you plans for the future?

My plans are going to the NBA, euroleague or ACB It all depend on me and the daily practices...


You are playing on in spain as a profesional, how did that happen for you??

Well my ass coach Nemanja who was Head coach of 79érs 2 years ago helped me..He got a contract here, and gave me a chance to play here.. he knew the serbian coaches here and soon i was on a tryout one summer, everything worked good out after those daye!

What are your thought after playing pro ball in spain for more than half a season, whats the differences and so on?

There are a lot of differences. first of all just to have 4 coaches arround you on practice, telling you what to do, explain and giving you advices helps a lot.. Basketball is a lot bigger and more serious than back home in Denmark.. here is the 2énd most played sport after football. Here is not only the 2-3 players from US who can bring and give some to the team, a lot of teams have a long bench who gives some important and good to there teams, including young players deffently young players..Then if you are a young player, i would recomend Spain. Spain is diffently the place to be if you want to get further in you karrier as a pro player. the oppoutunities is way higher down here, a lof of good players, league and scouting and so..And the level og leagues high.
Im lucky to have some excelent coaches who has a lot of exsperience and contacts. I almost have some NBA scouts or European scouts coming to oure club every 2 week waching our system, practice and games.. That not something you just get, defently not in Denmark! Only something you can admire and be honored and lucky to have!

You have been with the youth nationalteams several times, can you tell the world a little bit of some great experiences playing international with the nationalteam?
I started play basketball as 15 years old. now im soon 20.. my first apperance to the youth national team, was as a 2 year player at U-16 after that i have been there since. geting to play against a lot of good countries, teams and good players.. the best succses i had, was with the national team was my 1 year with U-18 in Hungary, we end up, as number 8 out of 20 teams. in that fact it were my 1 European championship and i remember how excited and a little nervous i was.. It was also the year were a lot of great players attended, while some of them now are playing Euroleague or NBA..This summer im maybe going for the last time, as youth player to Bosnien in Sarajevo with U-20.. I just not clear about my plans during this summer..
The other thing is, you cant exspect not to end up ranging over number 14 when u dont have a serious schedule and planification about the national team. to have 5 practices during a preparation for European championship is so not pro.. even placing 2 of the days in one week, and then wait 2-3 weeks for next practice and without frindly games is hopeless!

What skill are you working extra hard on right now?

A lot. im doing a lot of repeating in lowpost. such as reading defence, hookshots, fadeaway shots, dribble shots.. Also shots from outside the post, one or two dribble from 3 pointline and finishing, kevindurant style..

Quick 6 favourites
Favourite team in Europe? I never really like these question, beacause i dont have a real answer to them.. but i wacht a lof ot ACB and Euroleague, and you need to admire the game og Barcelona. and i also like Real Madrid as they are the team I see most while im living near to centrum.
Favourite player in Europe?

Favourite team in NBA? I like Wizards and Boston
Favourite player in NBA? I most say Dwight howard as one of them, I also like Javale Mcgee beacause i see myself playing like him.. Amare stoudemire i like to, I could keep going, lebron james, derrick rose, kevind durant and so on..

Favourite team in College? DONT HAVE ANY. not into college ball.. Not in my future list

What tips would you give to other younger players trying to fulfill their dream in becoming a pro basketball player?
Make the right choices, work hard, belive that you can do what you want, play everywhere, playing games and asking yourself why u practice? but same time be humble, not everything goes well.. If you dont already work everyday then ask youself if that is what you really want to do..

Any tips to coaches about handling young players that you can give?
Make them discipline and that they respect you even if they dont like you.
Posted by Coach Holmgran at 23:04