Fire arena is back in business

Our homecourt has been out of function for several months, first due to renovation with putting in a new floor, with all the new lines. The day that was finished the city of Hørsholm had 18cm of rain in a very short period of time and guess what, that new floor was totally destroyed and they had to throw it away and also takeout the gyms original floor since everything was ruined by the water.

Today was the first day of use in the gym that know has a new floor once again. Our ladies team played their rivals  SISU and it was a lowscoring game where Hørsholm played better basketball than SISU in 1,2,4 period,, but the rim had closed for the day, meanwhile SISU put in their easy ones and Hørshom missed them.

Hørsholm lost the game with 10 points if I remember correctly, but to me as usual I wasn`t looking at the teams so much as looking at the players that catches my eyes.

Some years ago there was two great danish ladies playing ball in Tine Freil and Anne Thorius both where world class players and have the CV`s to show for it.

I was lucky to see both of them play ball and had a blast everytime I saw "magic" play, thats what my nickname was for Tine Freil, artist on court and with he same understanding for the game as Anne Thorius. 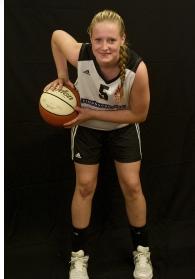 Coach Enbom has an unpolished diamand in Gritt "the next one" Ryder, so if you didn`t know now you now. All elite teams in Europe and Colleges should keep a couple of eyes on this girl if they dont someone else will and "the next one" will make the others pay their penelty :-)

Camilla Blands in SISU was good as usual and she is always a plessure to watch.

Tomorrow I have two games with my boys 98 so I know already that sunday will be a great day :-)
Posted by Coach Holmgran at 18:33