Well, no news that he is there, but it was nice to see Allen Iverson play real basketball for a change and not the NBA style of play. He had a OK game 15p in 23minutes, but he is not in gameshape really, but he will be I hope. 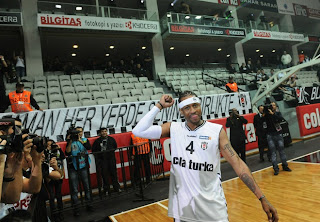 I watched a little of the swedish womens league game between Solna and Norrkoping, but I became quickly bored af all the dribbling without anycause at all.
So went back to see most of Besiktas vs Hemofarm instead a game thart besiktas had in their backpack, but the coach made som really stupid changes and he kepted Iverson in the bench until like 5 minutes left of the game.
What happened was that they had a comfortable lead, when a of a sudden Hemofarm became on fire from beoynd the threepointline and whoops, they where back in the game and of course with a long 3pointer went up by 2points.
Lesson learned in basketball a 15p lead goes away very quickly, dont celabrate until the game is over. The coaches helped with strange changes and hesitated to change back.
Besiktas learned there lesson with a loss in this game, a very unecessery loss as I see it.

Went back to womens game and all of a sudden Norrkoping came back from 20points down to making it excitning again, but the players in Solna that should take their team on their shoulders did and Solna got the win.

There was a big win in Sweden for Norrkoping Dolphins mens team who beat Turk Telekom in Euro challenge.