After the rain comes the sun 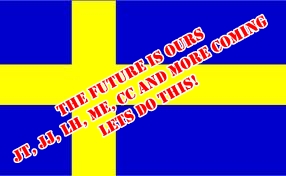 Because of work and youth basketball tournament in Sweden with my two teams I havent been able to see as much as I wanted to from Eurobasket in Slovenia.
And of course my native country Sweden playing there for the first time many years was something I wanted to follow.

But the way they lost those games was not ok, but lets talk about the positive because it happened......Sweden resurected themselves and stod up form the dead on a 9 count.

Beat Russia....yeah, yeah the didn`t have all players and so on, they played bad.....so did Sweden in the first two games, that is how sports are. More ups and downs than San Fransisco, more happy feelings and sad feelings than the Titanic movie, whatever you know what I`m trying to say.

Im happy to say that after Eurobasket has ended for the swedish squad I`m proud to be a swedish basketball maniac. The future belongs to us.

We had a new star show himselves and I wrote on this blog before eurobasket that Ludde Håkansson should play PG for Sweden regardless that he is 17 years old. He is the best we got at that position and after some games he was standing there as first choice PG. Damn I love it when I´m right!


Jeff Taylor is a star and everybody that has followed him in Vanderbuilt already knew that if his NBA club allows him to play he will be a megastar, but the odds works against him. He far from one of the best paid players on his team, so bench for him. Hopefully he has created a problem for his bobcats know cause he played like a superstar in this Eurobasket.

We got Jonas Jerebko a perfect role player and sidekick for Jeff together with Ludvig Håkansson we have a leathal 3 combo. We have som really skilled young guns coming up in the ranks and yes the future is ours.

According to some basketball page Headcoach Brad Dean stopped after the last game as NT coach, so now its al about finding the right HC for the job and the right staff around him.

I know who I want as NT coach and I may be wrong but I doubt it!
Posted by Coach Holmgran at 23:32