Jordan the GOAT Camp and some more.....

Growing up with Magic as me hero with a big hate towards Michael Jordan and tremendous respect for Larry Bird. I didn`t like Michael Jordan in the beginning I didn`t think he did what was needed to win, but he changed his game and approach to be able to win all the championships.

After he stopped playing I just had to ad one thing to his name "the greatest ever" and in the year 2013 nobody and I mean nobody is even close to his skillset in all aspects of the game. 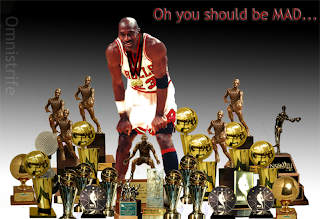 He has had a basketball camp in the states for many years and this summer not one but 4 of my players is attending his camp. I will have 3 of my girls and one of my boys there to learn from the GOAT and his camp coaches.
I`m 36 years old, stopped playing ages ago, but I`m so jelous of my kids and at the same time so glad for them that I have a big smile everytime I think about it.

Got more stuff to smile about and maybe in some days that smile will reach the top of my head, but I cant write about now. Throw him out is all I can write at the moment.

Organizing tournament for boys and girls born 1998 again this year in september and organizing a tournament is a lot of joy, but all teams, coaches that say YES to enter and then pull out after they said YES is a big big pain in the butt. They create so many problems for a organizer that I cant even describe it. I was suppose to have total vacation from basketball for two straight weeks which is almost unheard of when it comes to me, but I can forget about that now.

Both of my teams had a god season and many of the players developed as planned, some have a very bright future ahead of them and some need to go from talking to walking the talk to have that bright future, but talent is there. Unfortantly like everybody knows talent only takes you to a certain level and without the sweat, hours and hours of repitition and determination it stays as "the talented kid that....." didn`t make it.

Swedish womens nationalteam had a great Eurobasket and there is more to come from them.
I really hope our mens team can pull of some great upsets in the Eurobasket in Slovenia.

Cant help but dream about how the team could have looked like with some different decsisions being made.

We have:
Jeffrey Taylor, NBA bobcats
Jonas Jerebko, NBA Pistons
Christian Maråker, said no to play and I understand that. The third best player on the team, but eats more wood than woodpecker on the bench.

That is size and skill and I would play Jeffrey taylor as Poinguard call me crazy but I think he would handle it great.

Hope they still can upset I really really do!