I dont hear you!?

Well basketball is a world sport all almost everything is the same except NBA withits special rules, but there are differences and they are somethings huge in the cultural side of it.

Yesterday I watched the Nebraska Huskers play against Hørsholm ladies team and the day after against the danish womens nationalteam. The differences hits you directly when you enter the gym on the warmups. Nebraska owned the gym from they started warming up until the gym was empty.

They make så much noice in the warmups and YES sometimes its to much, but the effect it had especially the Hørsholms ladiesteam is huge. Some talk about winning the warmups and they won it big and already before the game had started they had put small mental ghosts in the head of danish players.

When game was played the Nebraska squad talked more in offense than the danish did in defense and that says a lot. But to be totally honest if you dont find a balance with what you say the effects will be less and less of a factor.

I mean talking just to talk is not the goal, but to use voice to controll the game in offense and defense is something totally different.

Nebraska is ranked around 100 in the states and this team had many first and second year students, so they lack a lot of experience but what passion they play with. American athleets in almost every sport are known for their hustle, the never give up attitude that makes less of a talented player outplay the more talented player.

That was a factor in both games, they crash the bords every single time for hustleplays and they go hard.

Another difference is the unity they have on the team you can almost taste it in the gym and they are liek usual very good at creating that unity. Collegeteams alway have nice teamclothes, the communicate loudly, the are focuses on the tasks, they have lots of people around the team ass coaches, managers, adm personal, phsyical and more. There are all the keys to creat a good enviroment for the player to develop. Of course you can always discuss player development in college, focus is winning but still the players if the choose to have all the possibilities in the world to develop, but focus will be on winning so the extra works needs to be done before and after.

After the game sunday I had 11 of my 25 girls born 98 in the gym and players and coach of Nebraska talked to them about college and whats that like. The Nebraska squad was awesome in what they did and the where truly rolemodels for our sport. 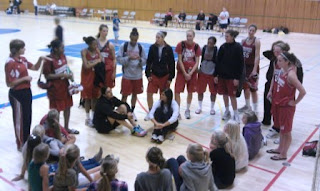 After they talked with the girls they arranged something special. Alla of my girls got a Nebraska shirt, but there was a problem they only had 7 new shirts left. Problem was solved quikly when some of their players took of there own shirts and handed then to the girls. A great experience during the game and a great eperience after the game. 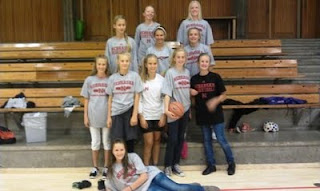 Will some of my girls play collegeball in the future only time wil tell, but after this talk with Nebraska players and coach its more likely that some will. If you dont know what the possibilties for playing basketball in the future are, what motivates you to continue practising and working hard?
Posted by Coach Holmgran at 16:00