What do I mean with that?
Well, again I go to myself when I started out as a coach. I never shut up during games i was telling the kids what to do in offense adn defense coaching/directing most of what happened on the court. 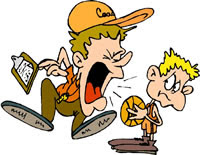 My teams played well or should I say I played well?
It took a couple of years before I realized that I wasn`t lettin the kids think the game, understand the game, I was simply controlling them like "puppets" in a way.

If you as coach shout "every" second on the game first of all in your will to win you stop a lot of progress for the players. Sure!, Propably you won`t play as well, make more mistakes, but we as coaches say that we learn from misstakes, so whats wrong with us. Well, nothing really.....difference in personalities is of course one, but our goal is the same to win (and for many to develop players), in most cases coaches calm down in couple of years I have heard its because his older and so on as a explationen, well I dont buy into that.

I instead hope that theese coaches that have calmed down have realized that screaming the whole game is waist of time and you will never see if what you practised has sunk into your players brains. Since you scream out everything. There is nothing wrong with passion and being active on the sideline at all, but there is a difference in being active and being a moviedirector instead of being a teacher of the game.

I changed in my way from screaming and running on the sideline, to standing still more and instead of screaming out, cut trough, swing the ball, now attack. Rotate in defense and drop down and so on.

To screaming out smaller things and instead of screaming it out I put mental notes in my brain. To my brain: "Coach, you are not doing this right in practise they still do it wrong, what can you do different in practise" Of course a talk about 1-3 things in breaks and timeouts and when players come out for a change, but huge differens between sreaming out to player when he/she is paying and talking when he/she has nothing else to focus about.

Dont know if you understand my thinking.....but this changed me and made me better I think.

There is missconception that I loud coach and a coach running the sidelines like a lunitic is being a good coach. Its easy to make that false assumption since you see a lot of commitment and passion and also often theese coaches do funny stuff or say funny stuff.

I truly believe that when you scream to much, you miss a lot of the game because you let yourself get stuck in situations that happens on the floor. Maybe a offense that went wrong, a call, a defensiv play and more, that you miss a lot of other important things. Simply your brain cant do it all and see the game.

I compaire coaching a lot with teaching in the school and practises are studying and researching to find the answers for the the tests that are coming up.If your are studying the right things going and doing it right, you can go on studying in, high shool, college, university and take higher level education and getting a great job and more.

Back to my point.......In school when kids to tests, the teachers dont stand in front of the class and call out what they should, write, draw, calculate and what order, and how fast and more. The kids know what they should be able to do, the have had lessons(practises) before the test, small tests maybe also, they have been shown, where to find all informatuion they need to do well on the test.

When they have a test in school the teachers sometimes speak, maybe a kids doesn`t understand what the teacher means with one question, how much time do we have left and so on. I think you get my point.

I will round of this chapter with, something that often goes hand in hand with the screamers of course everybody is not like this but.....You have to read between the lines :-)

Humiliation of players
One thing they do also that  I absolutly hate, they make fun of there own players or yell out stupid remarks to young kids. I have never understood how the parents can accept such a behavier in a coach. I have later in my "career" seen close up how parents of a team, thought that one of the lunatics, doing all of the above (+ didn`t teach them anything basketballwise) was "cool" and well he doesn`t mean so bad and so on.

Well if he doesn`t mean it, then he should be locked up somewhere with white walls and not coaching kids that will be shaped by this man mentally and so much more. Did all of the kids parents think it was OK?
No, but they didn`t want to make a fight and get hated by the other parents.

Well, thats thats throwing your kid to the wolves.....will he/she survive and be a good person/player, maybe, maybe....and maybe not.

Would you let your kids teacher in school behaive like some coaches do?
Well, answer is very simple
NO!

Look out for chapter 4 "Dealing with players and parents as a coach"
Posted by Coach Holmgran at 19:10